In this guide, we’ll take a practical, concise tour through modern machine learning algorithms. While other such lists exist, they don’t really explain the practical tradeoffs of each algorithm, which we hope to do here. We’ll discuss the advantages and disadvantages of each algorithm based on our experience.

Categorizing machine learning algorithms is tricky, and there are several reasonable approaches; they can be grouped into generative/discriminative, parametric/non-parametric, supervised/unsupervised, and so on.

For example, Scikit-Learn’s documentation page groups algorithms by their learning mechanism. This produces categories such as:

However, from our experience, this isn’t always the most practical way to group algorithms. That’s because for applied machine learning, you’re usually not thinking, “boy do I want to train a support vector machine today!”

Instead, you usually have an end goal in mind, such as predicting an outcome or classifying your observations.

Therefore, we want to introduce another approach to categorizing algorithms, which is by machine learning task.

In machine learning, there’s something called the “No Free Lunch” theorem. In a nutshell, it states that no one algorithm works best for every problem, and it’s especially relevant for supervised learning (i.e. predictive modeling).

For example, you can’t say that neural networks are always better than decision trees or vice-versa. There are many factors at play, such as the size and structure of your dataset.

As a result, you should try many different algorithms for your problem, while using a hold-out “test set” of data to evaluate performance and select the winner. Of course, the algorithms you try must be appropriate for your problem, which is where picking the right machine learning task comes in. As an analogy, if you need to clean your house, you might use a vacuum, a broom, or a mop, but you wouldn't bust out a shovel and start digging.

This is Part 1 of this series. In this part, we will cover the "Big 3" machine learning tasks, which are by far the most common ones. They are:

In Part 2, we will cover dimensionality reduction, including:

Regression tasks are characterized by labeled datasets that have a numeric target variable. In other words, you have some "ground truth" value for each observation that you can use to supervise your algorithm. Linear regression is one of the most common algorithms for the regression task. In its simplest form, it attempts to fit a straight hyperplane to your dataset (i.e. a straight line when you only have 2 variables). As you might guess, it works well when there are linear relationships between the variables in your dataset.

In practice, simple linear regression is often outclassed by its regularized counterparts (LASSO, Ridge, and Elastic-Net). Regularization is a technique for penalizing large coefficients in order to avoid overfitting, and the strength of the penalty should be tuned.

Regression trees (a.k.a. decision trees) learn in a hierarchical fashion by repeatedly splitting your dataset into separate branches that maximize the information gain of each split. This branching structure allows regression trees to naturally learn non-linear relationships.

Ensemble methods, such as Random Forests (RF) and Gradient Boosted Trees (GBM), combine predictions from many individual trees. We won't go into their underlying mechanics here, but in practice, RF's often perform very well out-of-the-box while GBM's are harder to tune but tend to have higher performance ceilings.

Deep learning refers to multi-layer neural networks that can learn extremely complex patterns. They use "hidden layers" between inputs and outputs in order to model intermediary representations of the data that other algorithms cannot easily learn.

They have several important mechanisms, such as convolutions and drop-out, that allows them to efficiently learn from high-dimensional data. However, deep learning still requires much more data to train compared to other algorithms because the models have orders of magnitudes more parameters to estimate.

These algorithms are memory-intensive, perform poorly for high-dimensional data, and require a meaningful distance function to calculate similarity. In practice, training regularized regression or tree ensembles are almost always better uses of your time.

As you'll see, many regression algorithms have classification counterparts. The algorithms are adapted to predict a class (or class probabilities) instead of real numbers. 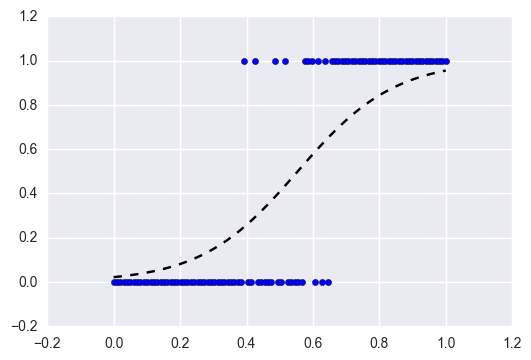 Logistic regression is the classification counterpart to linear regression. Predictions are mapped to be between 0 and 1 through the logistic function, which means that predictions can be interpreted as class probabilities.

The models themselves are still "linear," so they work well when your classes are linearly separable (i.e. they can be separated by a single decision surface). Logistic regression can also be regularized by penalizing coefficients with a tunable penalty strength.

Support vector machines (SVM) use a mechanism called kernels, which essentially calculate distance between two observations. The SVM algorithm then finds a decision boundary that maximizes the distance between the closest members of separate classes.

For example, an SVM with a linear kernel is similar to logistic regression. Therefore, in practice, the benefit of SVM's typically comes from using non-linear kernels to model non-linear decision boundaries.

Naive Bayes (NB) is a very simple algorithm based around conditional probability and counting. Essentially, your model is actually a probability table that gets updated through your training data. To predict a new observation, you'd simply "look up" the class probabilities in your "probability table" based on its feature values.

It's called "naive" because its core assumption of conditional independence (i.e. all input features are independent from one another) rarely holds true in the real world.

Clustering is an unsupervised learning task for finding natural groupings of observations (i.e. clusters) based on the inherent structure within your dataset. Examples include customer segmentation, grouping similar items in e-commerce, and social network analysis.

Because clustering is unsupervised (i.e. there's no "right answer"), data visualization is usually used to evaluate results. If there is a "right answer" (i.e. you have pre-labeled clusters in your training set), then classification algorithms are typically more appropriate. K-Means is a general purpose algorithm that makes clusters based on geometric distances (i.e. distance on a coordinate plane) between points. The clusters are grouped around centroids, causing them to be globular and have similar sizes.

This is our recommended algorithm for beginners because it's simple, yet flexible enough to get reasonable results for most problems.

Affinity Propagation is a relatively new clustering technique that makes clusters based on graph distances between points. The clusters tend to be smaller and have uneven sizes.

Hierarchical clustering, a.k.a. agglomerative clustering, is a suite of algorithms based on the same idea: (1) Start with each point in its own cluster. (2) For each cluster, merge it with another based on some criterion. (3) Repeat until only one cluster remains and you are left with a hierarchy of clusters.

In Part 2, we will look at algorithms for Dimensionality Reduction, including Feature Selection and Feature Extraction.

However, we want to leave you with a few words of advice based on our experience: